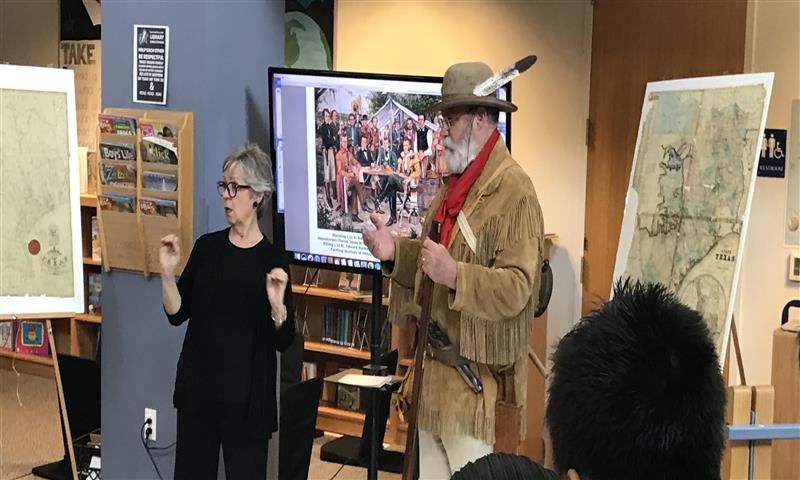 Much has happened since the first Deaf Smith chronology was published in 2012 in The Deaf Texan - the official newsletter of Texas Association of the Deaf. The work was eventually added to a Deaf Smith study guide in social studies lesson plans. With Deaf Smith’s 234th birthday coming up April 19, it was time to update the Deaf Smith chronology with all that has been learned since.

This updated chronology emphasizes the significant historical role that Deaf Smith played in Texas’ earliest history. There will be more new discoveries, interpretations, and deeper appreciation for Smith’s contributions. Other than the Briscoe Center for American History, the Statewide Outreach Center at TSD has my official Deaf Smith collection that aims to educate and inspire Texas history students.

Look for a surprise entry for 2025, mostly to keep Smith’s legacy an ongoing study with a “tongue-in-cheek”.

1825 -    Joined the DeWitt’s colony in Gonzales (Smith assisted with the surveying).

1829 -    Daughter Simona Smith was born. (She provided the vital Smith-Fisk family link that can be traced to the present generation in San Antonio, including the Kilpatrick clan. Her siblings all died of cholera by 1849).

1835 -    (fall) to 1836 (spring) - Fought as a soldier then as a private for General Sam Houston’s spy/scout company for the Texian Army in the Texas Revolution against Mexico.

Climbed a tall live oak tree on the Scull property in La Vernia to view the Mexican movements and report directly to General Houston. (Tree was destroyed by lightning, floods and drought in 2014.)

-    Died of consumption in Richmond on November 30 in Randal Jones’ house. Later, the Republic of Texas granted a pension of $500 a year to his family.

1849 -    Wife Guadalupe died of cholera in San Antonio, along with her son-in-law Hendrick Arnold, a freed Black war hero.

1854 -    Legislature gave his family a posthumous land grant. Eventually, the state added a house and more land, which Deaf Smith did not certify to claim, but family later won their cases during the latter part of the 19th century.

1890 -    Deaf Smith County in the Texas Panhandle was named in honor of the Texian hero.

1983 -    Texas School for the Deaf (TSD) renamed the school cafeteria after Deaf Smith. That facility is now a student center.

2009 –   David H. Pierce of Davideo Productions remastered and digitalized the video of the 1985 Deaf Smith play.

2011 –   With the assistance of the Texas Forest Service and the permission of the pioneer Scull family in La Vernia, Dr. Baldwin collected 11 salvaged logs from the Deaf Smith Oak Tree.

2013 –   The Deaf Smith Collection was developed into a major study guide for teachers and students.

2014 –   Deaf sculptor, Don Bauer, passed away. His Deaf Smith wax figure is permanently placed on display in the library of the California School for the Deaf at Fremont.

-    Dr. Baldwin donated his entire Deaf Smith collection (1985-2012) to the Briscoe Center for American History at the University of Texas at Austin. (Note: Baldwin thought he was done forevermore, but read on and laugh.)

2016 –   Dr. Baldwin and Dr. Chris Hull, the fourth great-grandson of Deaf Smith, emailed and met each other, and shared the latest research about Ranger Captain Smith.

–   Dr. Hull, an orthopedic doctor from Fort Worth, visited many schools to talk about Deaf Smith. He visited TSD three times since then.

-    Dr. Baldwin wrote a three-part series about the history of TSD land in which he focused on the impact of Deaf Smith’s contemporaries who established the school in 1856.

-    The Moses Austin Chapter #12 of the Sons of the Republic of Texas invited Dr. Baldwin to talk about Deaf Smith and TSD. The following year the descendants of Texians and Rangers gave a presentation and demonstration of artillery at the TSD campus.

2018 –   Dr. Baldwin gave a tour of the state capitol to Dr. Wendell Todd of Emory University. He wanted to see the large Huddle and McArdle paintings that depict Deaf Smith in action and in poise. Dr. Todd used scientific methods to prove Smith’s hearing loss for a research paper and national presentation.

2019 –   In a formal letter from Texas A&M Forest Service, the agency certified and confirmed the salvaged logs that Dr. Baldwin collected from the Deaf Smith Oak Tree in La Vernia, Texas in 2011.

2020 –   The Deaf Texan, the official publication of Texas Association of the Deaf, published Baldwin’s new three-part series about Deaf Smith, which is now available for school programs and the general public. Part Two of the series announces the name of Smith’s hearing dog: “Alarum.”

-    The City of San Antonio announced visionary plans to install an Alamo Sculpture Trail without naming Deaf Smith as one of the chosen figures. Consequently, Drs. Baldwin and Hull, and Andy Hull wrote letters of protest to the Briscoe Museum and Western Art and the city council. They asked that the statues of Deaf Smith and his son-in-law Hendrick Arnold, a freed slave and a battle hero, be added to make the plaza plan more diverse. The Hulls and Baldwin remain vigilant about this project, though due to the COVID-19 pandemic, the statue plans were postponed.

-   Retired from Gallaudet University, Theater Arts professor/playwright/author Willy Conley announced that the 1985 Deaf Smith play was chosen for his new Deaf plays anthology book. The script and video will also be added to the 2022 book by the New York and London publisher.

2021 –   Revisions made to update the Deaf Smith collection social studies lesson plans for use by educators and students.

2025 –   Deaf Smith’s missing grave is finally located a block from Houston and Sixth Street in Richmond. Texas Historical Commission and Texas State Historical Association financed the excavation with additional support from the Governor’s Office on People with Disabilities, the Coalition of Texans with Disabilities, and the Texas Association of the Deaf. Thanks to the Hull brothers’ DNA, the remains were positively identified.